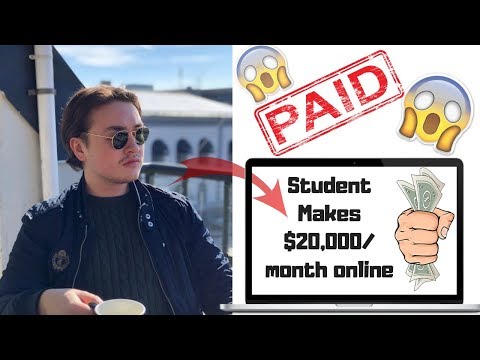 So, Emil, introduce yourself to everybody watching Tell us about your experience with this method How you've been able to go from pretty much no income to the point where now you're I want to say, living the dream, man Yeah! So- So, back to the story My name's Emil I'm 21 years old and I live in Norway I actually

It's a pretty interesting story with Ivan here, because it all started a year and a half ago, and I started to attend college, and literally just a month in, I was like, "Man, what am I doing?" I didn't see myself working with numbers all day with a bachelor's degree in business administration I didn't see that I wanted to do something bigger, and I already had passion for computers and stuff, and I really had an interest in business

Before it, I was a bit into stock trading, as well I had some interest, and some experience, from working for myself, right? So, literally while I was in college, just a month in I just looked out the window

I was like, "There must be something out there Something bigger" You see all these guys with their Lamborghinis and stuff [inaudible 00:01:54], right? And you're like, "Damn, they're so young Why don't I have that?" And so I start to search all over the place, all over the internet, and luckily I actually started to attend I bought a course where it was teaching about online stuff and online business, and all of that, and I started Drop Shipping by using Ebay, by leveraging Amazon on Ebay, and that's where I actually met Ivan That was around a year and a half ago That's when I met Ivan We started talking and he actually first taught me how to Drop Ship, and we talked and yeah! He gave me some great value

And we kept in touch I just continued to do that, but in the end Drop Shipping didn't make so much sense to me It wasn't something I would do in the long term, so I continued to explore several other ventures like Shopify, for instance, and I [inaudible 00:03:03], as well But later on, it would be around a year from now I bid less than a year, actually I reached out to Ivan again, and we started talking and he said that what he was doing right now, and it was just this business model where you only needed a laptop and a phone, and you could make money by just helping other businesses out So I was like- Everybody on the internet says that, man Yeah, you can start this coaching business

Yeah With a laptop and a phone! You don't need anything else! And a wifi connection, by the way Yeah But the thing was that even though everybody else says that, I knew Ivan from a bit earlier, so I was like, "Yeah, well, I'm interested in what he has to say" And he offered me to be a student of his

He offered to help me out and teach me this model, so I became a student of him and literally just the day after, I remember I had just been emailing a bit, and I already saw results I remember I sent Ivan a message like, "Hey, I already got some results Just have to get in a call" And he was like, "Yeah, it works" So just seeing that someone is interested and just seeing that moment

Like, "Hey, something works I'm doing something right" That was like sort of a break through moment for me I knew that I was doing something right and if I could just continue to do this, well, it would be great! So, I kept on doing it and now I'm doing like 20K in profit a month by just using this model, and I'm living life on my own terms I can do whatever Iw want

Like my plans later today is just to hang out with some friends and just chilling, because I can do that I know exactly what you mean I was just at the beach yesterday I didn't go to the beach today, but I took a long nap Yeah, I- A lot of people fail to realize that there's still work involved

I wanted to just share back and forth some experience with Emil, since he's one of my best students When was the first time you started seeing money coming in? Because now you're making solid five figures a month, right? Yeah And when was the first time when you were like, "Oh, that works!" You know? Oh, yeah Okay I remember- The first time of, "Oh, I'm definitely making it

Literally With this model, it is involved with sales and I was literally like I remember it was around Christmas, last year, when I was like

I got these calls, right? But I couldn't close them I sucked at sales That's funny

You pushed through Yeah, I did! The thing was that I actually sucked We had to get on Skype on Saturdays and he had to listen to me, and like, "yeah, do this better Do this Do this

" And with the feedback and help, I just kept on pursuing and just for example, if I take a call now with, for example, a realtor, it's like I remember that if I just If I'm going to take some free trials It's sort of different however you leverage this model, but if I'm selling free trials like where they pay for the service, so it's actually not free, but the thing is that I remember I've had several days where I'm just calling and it's like I'm closing five people in a single day, because that's the power of it, right? And you just have to follow up and just keep delivering

So, back to the story, when I had my first breakthrough moment Since I sucked at sales, I started around November, December, and I just kept pursuing it Just sell in a different language That's a whole other thing It's so different from selling in my native language, in my mother tongue

And by the way, just so everybody knows, you also thought about giving up, right? Oh, yeah I did Several times You literally had to pull me up Like back in February, I was in this

How do I say it, a very slow pace, right? I had been taking on around five calls a day, but I didn't get any sales, right? So I was like, "Damn I know it works, but there's something wrong with me I have to work on it, right?" But the matter of fact is that the only way to get better at something is to be consistent about doing it

I was like, "Damn This works" Awesome And how has your life changed since? What are the things that you're capable of doing now that you weren't before? Oh, there are so- changed, as well I mean, all of a sudden, you're making solid five figures a month, but how has that translated into actually bettering your life? How does your life look now, bro? Yeah

Bettering my life The thing is that while a lot of people say that money changes you, and shows who the real you are For instance, with me, literally I've become a healthier guy

I started exercising I started meditating Because you've got more time, right? I got a lot more time and I didn't have to work for the money The money works a bit more for me now That frees up some time

I can go to the gym and I can have a great breakfast For example, my dad, he's actually retired soon and he's been partially retired for some months now I can now spend time with him, help him out I can even be with my grandmother if I want to a lot of times, which I am And visiting my grandfather, as well

Spending time with friends, doing what I want Go on vacations if I want to I've been to Spain, for example So it's like Yeah It gives you so much freedom that you don't know what to do with all the time I've had to start many different projects, although we've grown now to The agency has grown to seven people now We've got four sales guys and three sales managers now, and you know what it's like to be working with people now You've actually become a business owner Yup

Not just working in the business, but you've actually learned to And still learning, to delegate less important tasks so you can free up your time So you learn how to leverage people, as well

Which is the real side of owning a business Yeah Good, man Good stuff What I'm gonna do is let's wrap this interview

Maybe we'll come back in a later time and explain further what are the exact steps that everybody needs to take in order for them to start a business and learn how to run it successfully, and make money Because that's the ultimate goal Yeah, it is Thank you for participating in this interview, and thanks for anybody who has been watching until that point I'll see you all soon